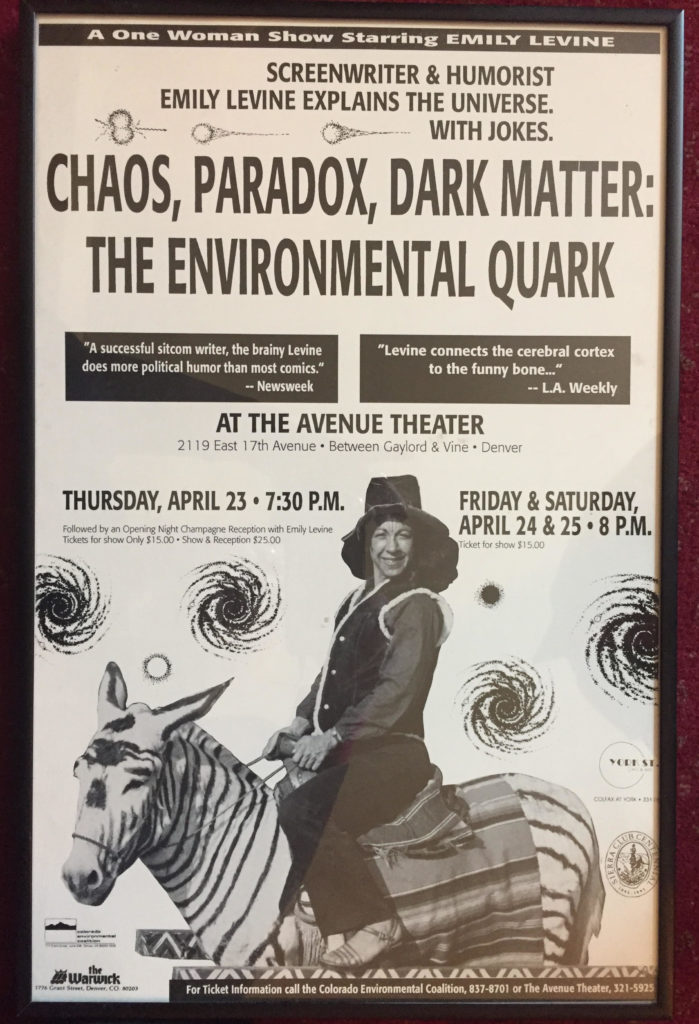 Emily Levine (1944-2019) rocked the house at the illustrious Comedy Works in Denver’s historic Larimer Square where we met in the 1980s. Her cerebral comedy at once trenchant and sympathetic was infectious, her deadpan caustic and charming. We shared a passion for laughter and science and arts. She arrived via Harvard, dubbed Spaghetti Westerns in Rome, performed improv comedy on the Ed Sullivan Show with the New York City Stickball Team, became a movie and television writer-producer for popular shows as Love and War, Designing Women and Dangerous Minds, and was hailed by Newsweek magazine as one of the “New Queens of Comedy.” She fashioned her brainy performance style into solo shows on stages nationwide including annual EG and TED conferences where she was an audience favorite. With engaging humor, she enlightened listeners on physics, the economy, and other subjects at times delivered by the Greek “Oracle” she conjured as science and art swirled like DNA entwined in harmony with her life.

Through the years we supported each other’s interest in science and arts, she as part of a greater community devoted to true science in theater, film and television. Her sources and friends included theoretical physicist Richard Feynman and actor Leonard Nimoy aka “Spock” of Star Trek fame. In Denver with the Avenue Theatre we produced and promoted her solo show, “Chaos, Paradox, Dark Matter: The Environmental Quark” in which “Emily Levine Explains the Universe – with Jokes,” an early version of “Emily @ the Edge of Chaos,” then our fundraiser for the Colorado Environmental Coalition. At the end of each show she had a Q&A and one evening was asked, “What is the origin of God?” Her thoughtful response, “Someone breathed.”

I loved Emily heart and soul. To be in her good company was sheer pleasure with always stimulating conversation. I would stay with her on business trips to LA and we spent our days together when she played Denver. When I moved to California Emily became friends with my husband David and oracle mom to my son Nighttrain. When he was old enough she’d take him to superhero movies, a genre of mutual enjoyment between them. When she moved from LA to Northern California for treatment, and despite her constant health challenges, we all enjoyed visits and outings.

Emily was my inspiration and advisor for SAGE as an enterprise that championed both science and arts while I followed her trajectory in science and arts and learned about Earth’s increasing peril and the imperative of creating a sustainable planet. It was a score or more years before our current business of SAGE – Science & Arts Global Exchange – was born to serve artists and scientists focused on environmental and social justice. Through it all Emily Levine’s lessons have been supreme, as rendered in her film, “Emily @ the Edge of Chaos” based on her work and her life, the passion of many years focused work wrapping to a finish just before her death. I had told her I’d envisioned us together at a grand opening night in LA. Now the work of distribution is in progress for this film gem, Emily’s gift, a stunning legacy.

In her comedy as her philosophy and manifested through her art, Emily shared her sagacity with audiences via stage and screen worldwide. She became the Oracle she’d envisioned born from her outstanding writing and performance resplendent with deep insight and trenchant wit. SAGE Artists dedicates the spirit of this column SAGE-ACITY to Emily Levine the Oracle. Your laugh alone brought me joy, I hear you laughing still.

See the movie Emily @ the Edge of Chaos and risk falling in love with Emily as I did.

Everyone needs a good Oracle.

* “I love being in sync with the cyclical rhythms of the universe. That’s what’s so extraordinary about life – it’s a cycle of generation, degeneration, regeneration. “I” am just a collection of particles….”

GS: You’ve been called “A mad professor genius comic” by Los Angeles Times for your stand-up comedy and one-women shows where you use science, economics and even the topic of intellectual property to deliver hilarious commentary on your subject matter. How did these shows evolve? 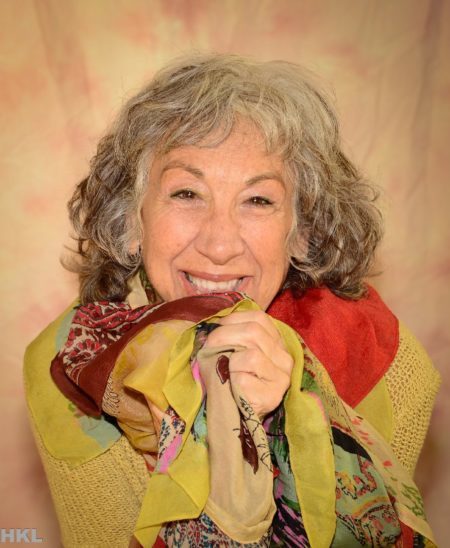 EL: The first one happened because immediately and serendipitously…I was bored with stand up and I was bored with writing television and was asked to present at a retreat for a think tank at USC Institute for Women and Men. It was the first time I was asked to speak to something substantive and people laughed anyway, which upset me until I realized that the laughter was the recognition of my comedy.

Studies that came out this year that humor primes the brain for those leaps of understanding we call “Ah-ha” moments. And right after that I was invited to speak at a physicists’ think tank in La Jolla and I knew they wouldn’t be interested and receptive to feminist theory but when I started looking at quantum physics and chaos theory I realized I could make the same arguments. The values of connectivity, interactivity relationality not to mention the “and-and” logic of wave particle duality – these that women have long been espousing and identified with – were part of the actual workings of the universe.

The marriage of Levine’s brain with her funny-bone has resulted in a new career as a stand-up philosopher and as a radio commentator for WNYC in New York.

GS: You have many fans, among them Bill Moyers, Norman Lear, Lily Tomlin, Arianna Huffington, Gloria Steinem, Matt Groening, Carl Reiner and even MacArthur Prize Winning Biologist John Hopfield. And you’ve performed for many diverse corporations and organizations as Human Rights Watch, League of Women Voters, Pacific Center for Health Policy and Ethics and American Trial Litigators Association. Do you find that merging a diverse mixture of fields in science and art allows you to cross boundaries and reach more audiences than straight stand-up comedy?

EL: I would say it’s enabled me to – speaking to those diverse audiences – to broaden my own understanding. Every time I prepare for one of these gigs I research out that particular field – journalism, bioethics, human rights…- and I’m able to make connections between my ideas, the science and how my life and how these principles play out in these different professions, and overall it adds richness and depth to the material, does broaden its appeal.

Performances of Levine’s shows have earned her accolades like “brainy and zany” (Time Out New York), a “mad professor genius comic” (Los Angeles Times) and standing ovations from audiences at the Tiffany Theatre and Theatre 40 in Los Angeles, and the American Place Theatre and the 92nd Street Y in New York. Her appearances at conferences and in corporate venues have also earned ovations, not just for her trenchant and hilarious commentary but also for her ability to leave the audience uplifted.

GS: Emily @ the Edge of Chaos is an 80-minute movie that centers on your one woman show, filmed live and then interwoven with animations, special effects, actual scientists and animated characters voiced-by noted actors and comedians.

EL: “John Lithgow is Sir Isaac Newton, Lily Tomlin is Ayn Rand, Leonard Nimoy is Freud, and Richard Lewis is Aristotle, if you can imagine a neurotic Jewish Aristotle! I wanted him to be Freud! Of all the parts, he chose Aristotle because he liked the line, ‘of two things one must be all of the other…’ from which he improvised hilariously.”

GS: All these elements work synergistically to further your – and the movie’s – goal: to save the planet.

EL: Shortly after we began the process of raising money for it I became incapacitated and diagnosed with a brain tumor and the benefit was that we wove the story of that into the movie initially against my will but the addition of a compelling personal story that served as a grounding between all the connections bet the science and (America) proved to be extraordinarily profound for the audience so the movie now incorporates my own life, experience, perspective.

My traditional mode is more stand-up (comedy); the movie incorporated a personal story that allows the audience to make an emotional connection with the material in a way that adds a huge dimension and makes the ideas more accessible. Incorporating that in all my shows is important to bring my own personal self and story in to give the audience that with which they personally identify.

To fulfill this lofty mission, Emily must explain quantum physics and chaos theory. Before the tumor, Levine was a successful stand-up comedian and television writer. Brain surgery got rid of the tumor, but it was quantum physics and chaos theory that offered her a new universe. Unlike Newton’s Universe, this new universe – Emily’s Universe – resonated with her actual experience: Things happen at random. Big isn’t better. Change is the default position. In quantum physics, Emily finds the answer to questions that had long vexed her: why it’s so hard to balance work and family; why quantity counts more than quality; why there’s a setting on the iron for Permanent Press?! She learns how to balance in a universe where there is no equilibrium, how to handle uncertainty, how to redefine “growth,” how to go with the flow, how to change her mind. These new skills not only enable her to get well, but to upgrade: from Emily 2.0 to Emily 3.0.

Now Emily’s out to upgrade an America she thinks has the same thing she did – a compulsion to grow beyond its natural limits. With its innovative mix of comedy, science and eye-popping visual effects, Emily @ The Edge of Chaos shows us how quantum physics and chaos theory are changing us and the world we live in. How we think about things. How we find meaning. Our values. Our relationships. Ourselves.

GS: You were a speaker for TED – Technology, Entertainment and Design – Talks from the 1984 launch in Monterey [in 2014 Emily was voted Top 100 Audience Favorite for TED’s 30th Anniversary] and later featured annually at the also prestigious Carmel-based EG Conferences, both places where innovative thinkers meet and present passion projects. You often give an end-of-the-day wrap-up, you have a skill of synthesizing the day’s talks with insight, grace and humor.

EL: My greatest talent is synthesizing information and making connections that nobody has necessarily thought of, but the moment I say them they get that they’re right, so the fun of doing this – with appearing in front of these conferences, especially TED and EG – is that I can make these connections between disciplines, show the diversity and communalities that are exciting and rewarding to people.

In the words of producer Norman Lear:
“Go see Emily Levine at the risk of blowing your mind, splitting your sides, and exiting a better person.”